Ask double Badger Eric Hansotia (BS ’91, ME ’92) what he did during his time at the University of Wisconsin–Madison, and he’ll tell you it’s a “long list.”

“I really am thankful for the foundation that was built during my years of being a student here at the campus,” Hansotia said, who majored in mechanical engineering but also found time to take classes in other areas including business. While he appreciated the curriculum and the outstanding professors (some he still keeps in touch with), what influenced him the most was the ability to go outside of the core he was studying. 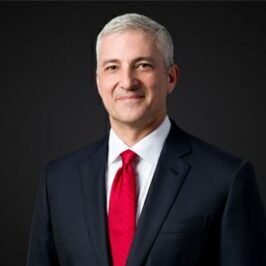 “It started the thinking about trying to create a broad foundation,” he said. Gaining mastery in one area is beneficial, “but if you can get a broad foundation, I’ve found at least, later in your career you have a much better chance of having a better perspective, because you can think about a problem from a number of different angles.”

Hansotia should know. He is chairman, president, and CEO of AGCO Corporation, a global leader in the design, manufacture, and distribution of agricultural equipment. The company has more than 23,000 employees, and earned $12.5 billion in revenue in 2022. AGCO is known for its award-winning line of smart products across the entire crop cycle and has invested more than $3.2 billion in research and development in the past decade.

Hansotia shared his insights for an audience of Wisconsin MBA students, faculty, staff, and alumni as part of the Wisconsin School of Business’ M. Keith Weikel MBA Leadership Speaker Series. He spoke in conversation with WSB’s Enno Siemsen, associate dean of MBA and masters programs and the executive director of the Erdman Center for Operations & Technology Management.

Watch the conversation in full: