If a third-grader in a lunchroom in rural Wisconsin is sipping a smoothie made with local yogurt, it might just be because of the work of students in the Grainger Center for Supply Chain Management at the Wisconsin School of Business.

The Grainger Center is in the third semester of a partnership with the Wisconsin Department of Agriculture, Trade, and Consumer Protection (DATCP) to help bring more locally produced foods into schools throughout the state. With the Wisconsin MBA specialization in supply chain management supported by the Grainger Center, supply chain management students in the Wisconsin Full-Time MBA Program are being tapped for the procurement knowledge they can bring to this project, which is funded through a federal grant.

“A lot of institutions that use local products have one-on-one relationships with the producers, but the most important next step is looking more systematically at how to do this for the state as a whole,” says Peter Lukszys, senior lecturer at the Wisconsin School of Business and director of applied learning at the Grainger Center.

Other project stakeholders include the University of Wisconsin–Madison Center for Integrated Agricultural Systems (CIAS), producers, consultants, a local foods nonprofit, and the distributors and purchasers of food served in public schools.

“When we met I realized pretty quickly that these were the thought leaders for farm-to-school in Wisconsin—and probably in the country—and wondered what our students could bring,” Lukszys says. “I learned really quickly there was a lot of demand for locally sourced food, but the logistics of the supply chain were really the last hurdle.”

Cost is just one factor

The Wisconsin MBA students’ ability to bring research to the effort was key, says project manager Vanessa Herald, farm-to-school outreach specialist for CIAS. Often the assumption is that procuring local foods is prohibitive due to cost, but there is generally more to it than that.

“We don’t always have the opportunity to look at the data and see what story the data is telling,” Herald says. “These are findings that can benefit farmers and kids who are eating at school, and that’s an exciting thing to be part of.”

Two of the students assigned to the project in Spring 2016 were Mallory Ballard (MBA ’17) and Stephen Larsen (MBA ’16). The second team to work on a local food distribution project, Ballard and Larsen looked for ways to bring more locally sourced yogurt into Wisconsin schools. In Fall 2015, Grainger Center students researched how best to use regional freight to connect local agriculture producers to the Chicago market.

Ballard and Larsen made a good team. Ballard earned her bachelor’s degree in conservation biology. Her MBA specialization is in supply chain management to pursue her interest in sustainability by learning to create efficiencies and cost savings. Larsen came to the Wisconsin School of Business with a background in supply chain as a logistics analyst for C.R. England, a refrigerated-trucking company.

“This project was a good opportunity to take what we learned in the classroom and apply it to a real-life situation,” says Larsen, now in the United Technologies Operations Leadership Program in East Harford, Connecticut. “What I liked, too, was this project typifies the Wisconsin Idea. We’re taking something we learned in the classroom and are able to support something that’s happening throughout the state.” 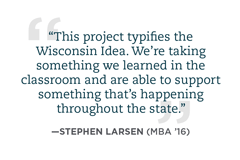 While the institutional market that includes schools, hospitals, and universities is a financial opportunity for local food producers and the focus of the DATCP grant, the student team chose to focus solely on schools because they had access to data. That allowed them to tighten the scope and complete the project in a semester.Uncovering surprising elements

The key question the students sought to answer was “Could Wisconsin-produced yogurt be introduced into Wisconsin schools?” In answering that question, the team uncovered some surprising elements of the issue.

Students attended a food service expo and spoke with farmers, distributors, producers, and school food service directors. They traveled to Kenosha, Wisconsin, to visit with managers of the food distributor that services two large buyers the students worked with—the CESA Nutrition Purchasing Cooperative working with 62 school districts and the Madison Metropolitan School District. They learned that a local cheese company that makes yogurt was already a vendor for the distributor.

“We thought there might be an opportunity there,” Larsen says. “They weren’t serving their yogurt yet, but the distributor did have their cheese, so we thought it might be an avenue to look into to get yogurt into the schools.”

The team acquired purchasing data to find out what the schools were buying and for how much, as well as learning about how schools planned menus. The data revealed two eye-opening details. First, schools want to purchase 4-ounce containers of yogurt (as opposed to the 5.3-ounce sizes that are commonly sold retail). Second, their biggest purchases are 5-pound tubs of vanilla yogurt in order to make smoothies, parfaits, and other yogurt-based snacks.

“We hadn’t thought about how important the 5-pound containers were until we saw the data,” Ballard says.

Following through on student recommendations

Larsen and Ballard spoke with two different producers in the state—one that had stopped producing small individual containers of yogurt and was focusing solely on 5-pound tubs of it and another that was planning to start production of yogurt sold in 4-ounce containers.

In the end, the MBA students’ key recommendation was that the schools work through distributors rather than individual producers to take advantage of time and resource efficiencies. In addition, the purchasing power of cooperatives and larger districts could help contain costs. The students also recommended considering two local yogurt producers: the one making 5-pound tubs of yogurt and the one making 4-ounce containers of yogurt.

“It was valuable to obtain data proving that the hurdles to buying local foods go beyond cost,” Herald sa
ys. “We learned that the story isn’t getting 4-ounce yogurt into the schools. It’s getting the tubs, and that’s not something we had the capacity to look into on our own.”

The students’ recommendations made a difference—a relationship has been established between a local creamery and the prime distributor for the school districts with work underway to bring the 5-pound containers of Wisconsin-made yogurt into the schools.

The partnership has continued in Fall 2016 with a new product—potatoes. A new MBA student team is analyzing the Wisconsin potato supply chain to determine how to get more state-grown potatoes, and potato products such as wedges, into local schools.