If things had gone as well for the University of Wisconsin men’s basketball team as they did for Wisconsin School of Business students and alumni sitting for the CPA exam, there would have been a lot of happy Badger fans this spring.

For the second year in a row, Wisconsin won the championship in the Uniform CPA Exam Bracket released by the National Association of State Boards of Accountancy (NASBA). The bracket placed the 64 teams in the NCAA men’s and women’s basketball tournaments against each other and advanced them based on first-time CPA exam pass rate for the 2015 calendar year. 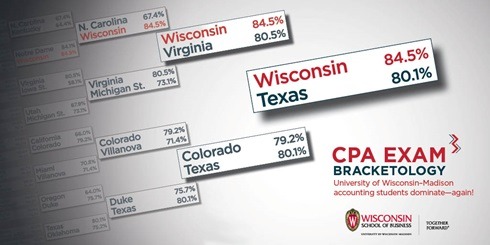 In the NASBA men’s bracket, Wisconsin was the overall champion with a pass rate of 84.5% in the final matchup, where it faced off against Texas (80.1%). In the Sweet 16 round of the CPA exam bracket, Wisconsin defeated Notre Dame (84.1%) in a reversal of what happened in the NCAA men’s basketball tournament in March. In that game, the Badgers lost to the Fighting Irish, 61-56.

“You almost want to say, ‘Gosh, I wish we could have used the bracketology when we played Notre Dame because our pass rate would have gotten us into the Final Four,’” says Terry Warfield, PwC Professor in Accounting and department chair of Accounting and Information Systems at the Wisconsin School of Business.

Warfield says that while the bracket results aren’t a benchmark for the accounting program at the Wisconsin School of Business, they are a fun way to illustrate the success of its students.

“The way I think about it is we are very proud of how well our students have done historically in the CPA exam,” Warfield says of the pass rate, which was 87.3% the previous year. “We consistently rank in the top five of all schools, not just the ones that get in the NCAA tournament.”

Warfield credits the quality of students who come into the program, the strength of the WSB accounting program, and incentives provided by firms to pass the CPA exam as success factors. Warfield also credits the Wisconsin Master of Accountancy program with preparing students well.

“A lot of the students who take the exam take it after completing our master’s program, so they have another year under their belt,” he says.

The Wisconsin accounting program has a different championship-caliber award to use when bragging about the success its students and alumni have with the CPA exam. WSB students and alumni consistently are among those honored with the Elijah Watt Sells Award given by the American Institute of Certified Public Accountants (AICPA) to recognize the exam’s top performers.

“To be in the top 100 of overall performance in taking the exam, that’s kind of rare air,” Warfield says.

Learn more about the Accounting and Information Systems Department at the Wisconsin School of Business.

The full 64-team Uniform CPA Exam brackets can be found on the National Association of State Boards of Accountancy website.