On the evening of December 6, while most students were cramming for finals, a few entrepreneurial-minded students were pitching their ideas for social enterprises for a shot at $1 million. The occasion was the Hult Prize, a social entrepreneurship case competition, in which student teams from around the globe tackle the world’s biggest social challenges through businesses that are both impact-centered and profit-minded.

The Hult Prize has partnered with President Clinton and the United Nations to become the world’s largest student movement for social impact. Since its founding in 2009, over 200,000 students from 1,000+ universities in 100+ countries have participated in the event. The Hult Prize has been named by TIME magazine as one of the top five ideas changing the world.

Each year, the Hult Foundation issues a different prompt for the competition, challenging its students to solve pressing social issues around such topics as food security, water access, education, and more. This year’s challenge was: Can you build scalable, sustainable social enterprises that harness the power of energy to transform the lives of 10 million people by 2025? Students are given six minutes to pitch their business ideas to a panel of judges, followed by four minutes of Q&A.

The panel of volunteer judges was made up of three business experts from the Madison entrepreneurship community. John Biondi is the founding director of Discovery 2 Product (D2P), which is a program that helps students, faculty, and staff at UW turn ideas into commercially viable companies. David Ertl is a Mentor-in-Residence at D2P, and previously worked for many years on his own businesses or launching products in the high-tech industry. Nhi Le is the current Director of gBETA Madison, an accelerator program for early stage companies as part of the nationally ranked startup accelerator, gener8tor. Aside from picking the winning team, these judges were tasked with providing expert advice and feedback to all of the participating teams. It was a unique opportunity for the students to network with and gain insights from such high-caliber experts in the field of entrepreneurship.

Student participants ranged from undergrad to PhD students with majors from engineering to business to political science. Their ideas also had a range of business models across a wide variety of industries. One team, Spectronics, aimed to eliminate Seasonal Affective Disorder using a proprietary LED light fixture that mimics the sun. Another team, Blockpower, was using blockchain technology to power energy grids. Still another team, NovoMoto, was working to provide renewable electricity to rural communities in sub Saharan Africa. To pick a winning team, the judges certainly had their work cut out for themselves.

Despite the high caliber of all the teams who participated, team NovoMoto came out as victorious. NovoMoto is already empowering communities in the Democratic Republic of Congo by providing them with reliable electricity through solar panels. Through smart battery packs and a pay-as-you-go solar powered system, NovoMoto has established a sustainable business model with the potential to make an impact on millions of lives. The company was founded by Aaron Olson and Mehrdad Arjmand, both alumni of the WAVE and MEB programs. Also on the NovoMoto team were Scott Groux and Lianne Komen, both undergraduate students in the Materials Science & Engineering program.

As the winning team, NovoMoto gets an automatic bid into the Regional Hult Prize event, which takes place in 16 different cities around the world in the Spring. There they will represent UW-Madison and compete against hundreds of other teams who each won their own campus rounds. If they win, NovoMoto will gain access to a summer accelerator program in London and their shot at the Hult Prize Finals, which take place at the United Nations headquarters in New York. There they will have an audience with such figures as President Clinton and Muhammad Yunus, and a chance to win the grand prize of $1 million in seed funding for their business.

Although only one team won the UW Hult Prize, all of the student participants gained a lot from the experience. Not only were they able to practice putting a business plan together, but they gained experience pitching to judges and defending their ideas during the Q&A sessions. In addition, they were able to network with the expert judges and make connections with fellow entrepreneurial-minded students within the UW-Madison community.

It was certainly inspirational to bring so many students together who want to use business to effect positive social change. We wish all of the participating teams the best of luck with their ideas, and especially NovoMoto as they move onto the next round of the Hult Prize event! Read More 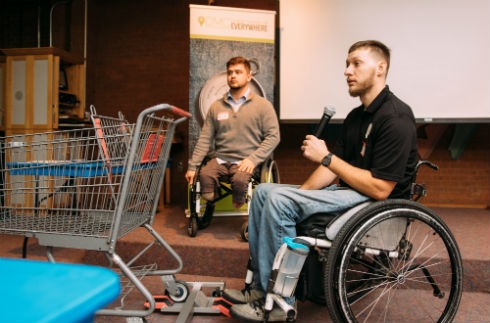 Open Pitch Competition for Innovations to help People with Disabilities