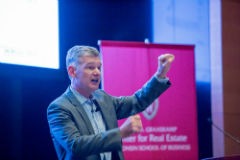 More than 130 board members, alumni, students, and friends of the Graaskamp Center for Real Estate listened to a keynote presentation by Mark Yusko, CEO & CIO of Morgan Creek Capital Management. Yusko’s talk centered around a market review and outlook for the longest bull market in U.S. history. He touched upon the historical statistics that have preceded inflection points in the economy including equities overvaluations, high leverage points, and waning yields. In a market where financial conditions are clearly tightening and the yield curve is indicating the cycles near end, Yusko advises gut-checking investor’s “can’t lose” mentality in buying growth and value.

Yusko said the trade war remains the largest threat the global markets and the combination of tightening fiscal policy, rising rates, and looming trade wars will continue to impair global market performance, and recommended building Alpha driven portfolios and transitioning towards private investments as the core of investment portfolios.

He concluded by saying the Blockchain Era is right around the corner with cryptocurrency being the next great wall of money. 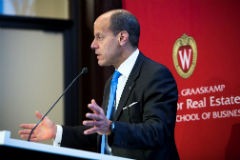 Keith Breslauer, the Managing Director of London-based Patron Capital, delivered the Morning Keynote. He began his presentation with an economic update in Western Europe, which included a heightened state of political stability, much better liquidity and availability of credit, a strong state of employment and consumer confidence, and concern regarding financial institution regulation and taxation. In addition, Breslauer spoke about the state of elections and referendums in Great Britain, Spain, Germany, and other Western European counties, where there has been a continued vote against the status quo. 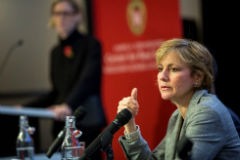 The panel ended by saying to expect increasing volatility attributed to a rising interest rate environment and tense geopolitical climate this late in the cycle. 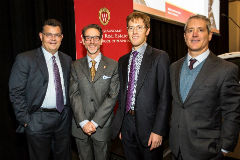 Dan Thomas, President of DT Capital Group and former founder of the Real Estate Specialties Group (“RESG”) for Bank of the Ozarks (“Bank”) in 2003, emphasized a focus on risk profile and value in basis for deals in gateway and emerging markets. Josh Wechter, Managing Director and the Co-Chief Investment Officer of Jamestown, echoed those sentiments, saying a gut-check in deal selection and fundraising will remain key in finding risk-adjusted returns.

Malayappan Murali, CEO of Shriram Properties, said latent demand for housing stands at 10 million units per annum with a cumulative shortage of 90 million units in India, mostly concerning the economically weaker and low-income group. Murali noted the “Ease of Doing Business” policy, which has contributed to a significant reduction in the amount of time necessary to gain statutory approvals from 2-3 years to as few as 40 days in Mumbai.

Alberto Smeke, Managing Partner at Mexico-based Grupo Alsavisione explained that Mexico’s large working age population is generating strong demand for worker housing in major Mexican cities. A multifamily “shadow market” has been created by a lack of institutional quality rental housing outside of major markets, forcing many who cannot afford to own to rent condominiums owned by individuals. In response, the Mexican government began several initiatives, including attractive lending to developers, to incentivize construction.

Session 4: CEO Keynote Conversation: A View from the Top 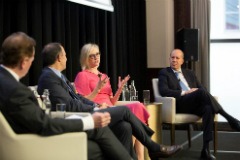 Graaskamp Center Executive Director Michael Brennan hosted a discussion with industry CEOs on what they will be paying attention to in the near future. The topics of discussion ranged from comments on the current real estate cycle to strengths and weaknesses of their sectors.

Ken Bernstein, CEO of Acadia Realty Trust, said retailers have once again began to invest in their consumers, which will bode well for property owners, and predicted that negotiating power on rents will balance out in the upcoming years. Greta Guggenheim, CEO of TPG Finance Trust, noted increased competition and high asset prices, an environment that will require diligent underwriting. Juan Monroy, CEO of Mexcio-based REIT FIBRA Macquarie, discussed the rapidly improving Mexican market, which, as it improves, will continue to generate further institutional interest.