In my last year working with the Weinert Center, I have had the privilege to connect with a number of esteemed alum and board members of the program. From consulting gurus, technology leaders, food science pioneers, and established intrapreneurs to newly-graduated founders, I have seen firsthand how the Weinert Center for Entrepreneurship has connections in every industry as part of its robust national network. But while the perspectives of each person I have met through the Center are unique, one recurring theme of most conversations I have had is the praise they heap on Dan Olszewski’s Weinert Applied Ventures in Entrepreneurship (WAVE) course taught every spring. Now that I myself can claim to be an alum of the course, it’s plain to see why the course is so often cited by graduates as one of the most impactful experiences to come out of their academic careers.

The course is deliberately structured in such a way as to maximize autonomy among students and Dan artfully balances his role by playing the parts of both facilitator and instructor. Prior to even the first class, students self-assign groups, with those who have venture proposals able to recruit classmates. Students have the option to join groups based on their interests or skillsets. From there, the semester follows 4-6 teams of students develop a business model through customer research, market surveys, channel exploration, financial modeling, and more.

While the course in no way discourages students from following their passion in their approach to venture creation, the Lean Start-Up model and associated frameworks used by Dan in structuring the developmental milestones each week do inevitably force students to reckon with some harsh realities. As a result, pivoting is not at all uncommon, and many teams end the semester with a business model that bears only a slight resemblance to the initial proposal at the start of the semester. In fact, much of what makes the course so engaging is getting to see how and why each teams’ business models evolve. Each class, teams are responsible for presenting their insights from the previous week to their classmates, which often involves a willingness to adapt their idea to best deliver on their value proposition. This spring for example, one team developed a unique dating app platform that leveraged user-generated video content. However, their initial pitch was for a very different concept: a service that would help daters optimize their photos. Another arose out of a complete transformation; the team was originally to develop a recipe-sharing online community!

Despite (and really, thanks to) the many adaptations made among the teams that comprised the Spring 2021 WAVE class, the course concluded yielding four distinct, developed business models. Celling It capitalized on its multi-disciplinary team composition to create an affordable Fluorescence Resonance Energy Transfer (FRET) microscope and market it to educators and labs while Breakfast Burrito Buggy conceptualized a novel method to deliver breakfast to Madison residents by way of a residential community-facing food truck. Yogi Cow brought three MBA candidates together to identify a possible blue ocean market in India and market a high-protein dairy beverage towards health-conscious consumers. The short-video dating platform designed for creatives named One Take took a winding journey over the course of the semester, changing its value proposition several times, but ultimately ended up being one of the most inventive, exciting concepts proposed.

But to be a successful WAVE student, you must internalize the give-and-take that defines the discussion-oriented course. Each week, students are tasked with preparing a brief presentation, which is just as much to elicit feedback from their classmates as it is to keep everyone abreast of what progress the teams have made since the previous class. Dan helps moderate the open Q&A portion following each presentation, but there is also something to be said for the level of engagement among WAVE students; there is a community atmosphere that permeates the class. Students are invested in their classmates’ proposals as much as their own team’s and much of the feedback that drives the teams’ progress week to week come from ideas or suggestions raised by classmates.

Beyond presentations, the course features three distinguished speakers, two of which are advisory board members. Real estate entrepreneur Bruce Nevaiser, who has spoken to WAVE students for years, returned again this year to give his famously candid and inspiring talk on personal resilience. John Neis of Venture Investors and Michelle Collins of Hyde Park Angels generously shared their perspective as investors and helped students get a better idea of how to effectively articulate to venture capitalists their business model and what kinds of answers they would be expected to provide in defending their ideas.

Whether you fully expect to one day start your own company, or are simply enterprising and interested in learning more about value creation, WAVE offers its students an alternative paradigm of instruction where they are empowered to teach one another. While a handful of the business proposals are realized following graduation, many are not. Even so, the methodology and frameworks for creating value that are instilled in the course are invaluable tools that all graduates, irrespective of career path, can use in their futures.

The four WAVE student teams are: 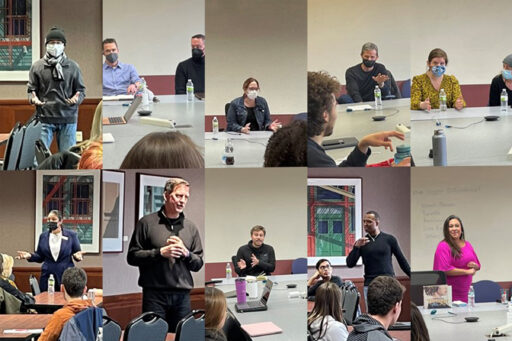