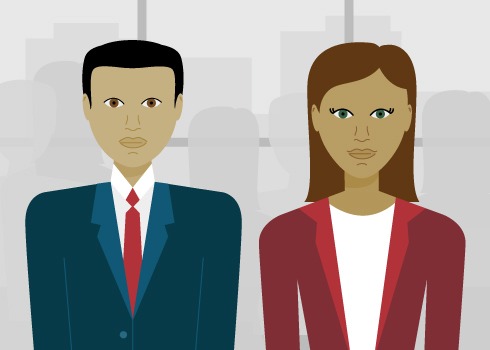 Back in the 1950s, major U.S. orchestras including the Boston Symphony Orchestra realized they had a gender problem: Female musicians made up a disproportionately low percentage of their membership. Organizations started holding “blind” auditions, with players trying out behind a large screen. The problem was, the sound of women’s heels could still be heard, so the orchestras asked musicians to come in without shoes. Over time, organizations were able to increase the number of women in their ensembles because they actively worked against their own implicit biases.

Unfortunately, implicit bias or subconscious bias—when we as humans make discriminatory judgements about others based on our hidden beliefs—is alive and well when it comes to the role of women in the modern workplace.
In my study with Orlando Richard at the University of Texas at Dallas and Ilhami Yücel at Erzincan University in Turkey, we looked at the ability of supervisors to instill organizational commitment in their employees. If supervisors have fewer credentials than their subordinates (less education, less organizational tenure, less overall work experience), do they still inspire that bond with the workplace? What happens if the supervisor in that situation is a woman?

In the first study, a hospital setting in Turkey with predominately female staff, male supervisors who were less qualified than their subordinates were ranked more highly by their employees than were female supervisors who had superior credentials compared to their subordinates. In fact, these female managers came in last: They were ranked more poorly than female managers who had fewer credentials than those they supervised.
In other words, the most qualified women scored the lowest: their credentials worked against them and they were less able to instill a sense of organizational commitment in their employees.

Women ranked alongside men—as long as there’s no doubt

In the second study, we surveyed employees in a pink-collar setting in the U.S. Unlike in Turkey, what we found was that female supervisors did very well as long as their credentials were impeccable—they needed to be head and shoulders above the individuals they supervised in every aspect. The minute there was any doubt—anything a little shaky—about their qualifications, employees were less eager to be affiliated with that supervisor and the larger organization.
That’s classic role congruity theory come to life: This notion that males as the dominant group are given the benefit of the doubt. It’s essentially a double standard; individuals in the prevailing group are given greater latitude before they are called on their mistakes or before their knowledge and authority are questioned. Their degree of failure and incompetence has to be greater before that person is penalized in proportion to the lower status group.
These findings are significant in today’s workplace where we are seeing greater numbers of female managers than ever before. Our perceptions about women in leadership need to change for two important reasons:
1) Because today’s workforce is diverse and ever-evolving
Due to changing demographics—age diversity, gaps in employment, individuals returning to work even after retirement—employees find themselves in less traditional supervisor-subordinate relationships. Many workers may report to a younger supervisor and greater numbers of women are represented in middle management.
2) Because it helps us understand the nature of leadership
Knowing how and why employees feel bonded with their organizations means there’s a better chance at replicating those conditions. Committed employees tend to put the good of the organization ahead of their own self-interest.
Categorization in society is functional and helps us navigate throughout our day. If we are shopping at the grocery store and pick up a piece of fruit with mold on it, we’ll toss it back without even thinking because we know it can make us ill. However, categorization that discriminates against others—even if it’s on a subconscious level—is wrong and should be held up to the light. Like the Boston Symphony Orchestra, we need to be actively challenging our personal biases when it comes to women in leadership, not just for ourselves but for the greater health of the organization.

Read the paper “Status Incongruence and Supervisor Gender as Moderators of the Transformational Leadership to Subordinate Affective Organizational Commitment Relationship” published by Personnel Psychology.
Maria Triana is the Cynthia and Jay Ihlenfeld Professor for Inspired Learning in Business and an associate professor in the Department of Management and Human Resources at the Wisconsin School of Business.