The University of Wisconsin–Madison’s Badgerloop team is back for another round and, this time, it’s built for speed.

Badgerloop is one of only 24 teams worldwide selected to compete in SpaceX’s Hyperloop Pod Competition II, says Johnny Kohlbeck (BBA ’19), an information systems and management and human relations major at the Wisconsin School of Business who serves as the team’s operations director. He’s one of about a dozen WSB students involved in the prodigious effort to build Hyperloop technology, an alternative mode of transportation where pods can move through large tubes at extremely high speeds.

Owned by global entrepreneur Elon Musk, SpaceX pioneered the idea of hyperloop technology and launched the first pod design competition in January 2017. The Badgerloop crew took home one of two Innovation Awards, competing with one of the few pods that was built to a life-size scale. Though not designed for comfort, it was enough to grab the attention of Musk, who tested out the seat, marking the first time Musk ever sat in a Hyperloop pod.

This time around, the true test will be in the pod’s functionality and speed. The Badgerloop team—which consists of nearly 100 students majoring in everything from engineering to business—is building a new pod virtually from scratch. The design will be smaller and less intricate, weighing approximately a third of the original model’s 2,100 pounds.

In order to compete, all teams will need to run their pods in the nearly one-mile test track tube built by SpaceX at its Los Angeles location. Building a pod that can sustain high speeds in the test track is a huge challenge, Kohlbeck says.

“That’s the number one goal for us—to get in the tube. And then number two is to win.”

Regardless of the number of competitions or awards—the team received the Dean’s Award of Excellence at the Bucky Awards this spring—Badgerloop is committed to its grassroots feel and formula.

“We completely identify as a startup,” Kohlbeck says. “There’s this picture of us that gets used in [WSB] entrepreneurship classes where we’re at our hotel. The beds are up against the wall and everything’s cleared out. We have floodlights in there, and we’re working on electrical system over here, braking system over there, and just wiring at 3:00 in the morning.”

Unlike many of the other teams who have staffers or faculty members working on their pods, Badgerloop is a completely student-run organization. The experience is a natural extension for business students, Kohlbeck says, since many want to start their own company or work for a company like SpaceX.

“They’re taking that Wisconsin School of Business education and going completely outside the classroom, just taking it in a direction no one would have ever imagined.”

It’s also a truly interdisciplinary collaboration, Kohlbeck says, because there’s no friction between the business and technical sides. The student engineers share knowledge and get business students involved with the actual construction on the pod, whether it’s soldering wires on the battery box or doing riveting work, while students from business and other majors contribute in-demand skills related to operations, supply chain, marketing, and fundraising.

Max Goldberg, a sophomore materials science and engineering major who is working toward an entrepreneurship certificate at WSB, says being part of Badgerloop has been an opportunity for personal and professional growth.

“Working on the project allows me to explore fields of engineering outside of materials engineering while enabling me to develop my entrepreneurial skill set,” Goldberg says. “For the first competition, I learned some essential fundraising and marketing skills.”

While the Hyperloop dream has roots on the West Coast, Kohlbeck said the Badgerloop team is also looking at whether this technology could be suitable for Wisconsin and other areas in the Midwest.

“How can we position ourselves here in Wisconsin to put ourselves in an advantageous spot for building something from Minneapolis to Chicago, which is a high-speed rail market that hasn’t been tapped yet?” Kohlbeck says. “If you see states like California, Florida, and Texas, they are all getting them.”

Michael Schlicting (MBA ’14), Badgerloop feasibility team lead and a master’s and Ph.D. candidate in transportation administration and community development, says that while the United States is “moving slower” due to issues of security, congestion, and complicated regulations, Badgerloop’s cross-disciplinary approach is a potential solution. 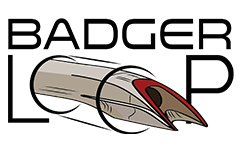 “While Wisconsin history is full of failed attempts to bring high-speed rail to the state, a change in attitude is occurring,” Schlicting says. “Part of that change began when a small group of engineering and business students no longer desired to reinvent the past, but rather focus on the future and going faster. Today, more than 100 students from business, physics, economics, communications, and even family studies are getting together with engineering students to invent the future.”

Looking back, Kohlbeck says he can see how Badgerloop has grown from a small group of engineers working out of a dorm room to a project that incorporates so many different disciplines across the UW campus.

“Every single person on our team is passionate about cool technologies of the future, going faster, helping bring this fifth transportation mode to life or just working on something that’s going to help benefit society,” Kohlbeck says.

It’s a mission that Kohlbeck finds extremely gratifying as well.

“To find a place that is welcoming to me and allows me to bring value to the table while getting to do what I love, it’s just awesome. I think at the end of the day, it’s about feeling like you can actually make an impact.”