In 1982, a wife got out the checkbook and had a conversation with her husband about the tedium of paying the bills. It was an ordinary, everyday moment, one that probably played out millions of times throughout American households of the era, except this particular wife was Signe Ostby (BBA ’75, MBA ’77) and her husband, Scott Cook. Their brief exchange would eventually generate Intuit, Inc., the financial software giant that includes Quicken, QuickBooks, and TurboTax. Intuit’s 2021 revenues totaled $9.6 billion with a market cap of $130 billion.

Cook shared his insights in conversation with Vallabh “Samba” Sambamurthy, Albert O. Nicholas Dean of the Wisconsin School of Business, for an audience of Wisconsin MBA students, faculty, and alumni as part of the school’s M. Keith Weikel MBA Leadership Speaker Series.

Cook co-founded Intuit in 1983 and currently serves as chairman of the executive committee of the board. He was a former board member of Amazon, Procter & Gamble (P&G), and eBay/PayPal, as well as a consultant for Bain & Company and a brand manager for P&G. He holds an MBA from Harvard University and a bachelor’s in economics and mathematics from the University of Southern California.

Here are some highlights from the conversation:

Cook’s early time with P&G proved to have a lasting influence on his approach to problem solving and entrepreneurship. “I took the P&G playbook and really applied it in a different category,” he said.

P&G was an example of what Cook referred to as distinguishing between product and process. “You see that truly breakthrough companies, who then last for years or decades or generations, may be more famous for a product, but inside is a process,” he said. P&G products like Pampers or Tide might immediately come to mind, but the firm’s process was the creation of the brand management concept, Cook said. Other examples are Henry Ford’s Model T product versus the assembly line process, or Toyota’s vehicles versus their production system.

“When you pick where you work, you’re picking that collection of methods and mindsets,” Cook said. He raised some eyebrows in 1976 by choosing P&G over tech companies like IBM, but it paid off. “The stuff I learned there was essential, and we saw direct competitors who hadn’t gotten those lessons make mistake after mistake after mistake. And ultimately, they’re all gone.”

Intuit’s early years “were all lows,” Cook said. He and his co-founder, a Stanford engineering student at the time, were in the process of creating what would later become Quicken. They decided to build out the product enough to have something to show to potential investors, and began to test it with consumers.

The individual user experience wasn’t as important to the corporate world, Cook said, since companies generally mandated the software their employees used. “Ease [of use] didn’t matter for that market, but it did matter to us,” he said. Cook found an expert in user interface, and together they continued to test the Quicken model with real people to see how easily they could navigate it. “We’d put them in front of it and say, ‘Okay, here’s the bills, pay them,’” Cook said. They also timed the software, aiming to make it perform faster than anything currently on the market.

Armed with the product and a lot of solid data behind them, they reached out to investors. Zero interest.

Cook and his team had hoped for $2 million to put toward marketing. They ended up with only $151,000, but it was “angel money,” he said. “It kept the doors open, but we didn’t have the money for marketing. So that started years of struggle where nothing worked.” They were unable to pay salaries and scraped to pay the mortgage.

Finally, things started to turn around. They had been able to incorporate some advertising and connect with several banks. “The business switched to tripling every year, just on that one product [Quicken] triple—then another triple, and then another triple,” Cook said. What was driving the overwhelming response? Customer word of mouth. The small consumer base they had was spreading the word like wildfire about this user-friendly new software.

Back in the Quicken days, Cook noticed an odd phenomenon: Based on survey data, Quicken consumers were frequently using personal finance software in an office, not in their own homes. They were using it in their bookkeeping jobs, not for personal use. He talked to these users and found that they appreciated the ease and simplicity of the checkbook-style approach and wanted to apply it in their jobs—even though for the same price, small businesses could buy a full set of advanced accounting software. That was useful information.

“We assumed the paradigm was, of course, they all used accounting [software]. No, they hate accounting,” Cook said.

When Intuit launched QuickBooks in 1991, “we positioned it as the first accounting software with no accounting in it,” he said. The company outsold the competition within two months. Today, QuickBooks makes up half of Intuit’s business.

Similarly, Cook shared the backstory of Microsoft’s attempted acquisition of Intuit in the 1990s to the tune of $1.5 billion. Since both led major public companies, Cook and Gates held a secret meeting away from the press at the United Airlines Club at the Seattle-Tacoma International Airport. “We went in separately so nobody would see us going in the same room together,” Cook said. “We talked and we both got really excited about it, so excited we kind of lost our cool and walked out of the club into the concourse together, saying, ‘This will be the biggest deal in software history.’”

The Department of Justice ended up investigating and the merger never happened, but Cook said it reminded him of the Garth Brooks hit, “Unanswered Prayers,” a song about being grateful for what didn’t work out.

“One reason it turned out so well was because as soon as the deal was broken up, then suddenly all the banks came to us because we were the chosen child—and now made friendly because we were not part of Microsoft,” Cook said. “So who knows, you can’t predict. ‘Thank God for unanswered prayers.’”

In 2016, Ostby and Cook signed the The Giving Pledge, a movement started by Warren Buffet and Bill and Melinda Gates that encourages the wealthiest individuals to give the bulk of their wealth to philanthropic causes. Ostby and Cook’s commitment is focused on four main areas including education and tackling climate, especially controlling methane emissions, the more harmful greenhouse gas.

Cook said their work on methane began roughly seven years ago. “Everyone gives the attention to carbon. Methane is 25 times worse for climate than a half-pound of carbon. It was largely not being funded, so we helped with getting started through measurement and detection. We work in medical research typically around autoimmune diseases, which has also led to the human microbiome. It turns out there may be a link between what happens in your brain and what happens in your gut.”

Cook and Ostby established The Center for Brand and Product Management at the Wisconsin School of Business in 2002  in order to fill a gap in business education—no one was training business students to be top-notch brand and product managers. Both Cook and Ostby began their careers as brand managers, and both continue to play a hands-on role in the center to this day. 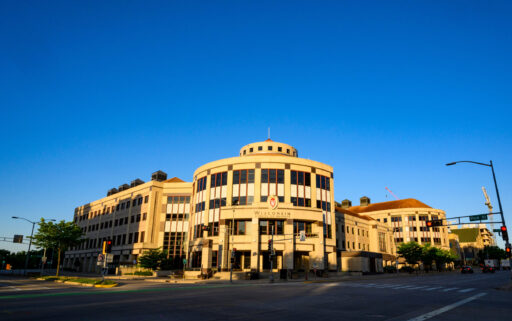 Expanding Innovation and Access: WSB Announces the Redesign of the Executive MBA