A hello at a coffee shop? A comment about a favorite team? A complaint about the weather? It’s not just mindless chatter to Williams. It’s the kind of human connection he believes is missing in our culture, and he’s committed to doing something about it. 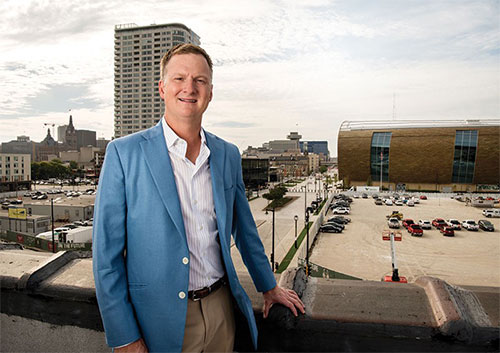 Williams is founder and president of WiRED Properties in Milwaukee, a real estate development company and consulting firm that holds as its core value building communities. For Williams and WiRED, it’s not just a marketing phrase, but a proof of concept that is transforming neighborhoods, including the area around the new Milwaukee Bucks arena that opened this fall. With projects that help bring people together, Williams believes real estate can make a real difference.

“That smile on the elevator can lead to ‘How was your commute today?’ to ‘Where do you live?’ and then you talk about your kids,” Williams says of the random conversations most people take for granted. “That kind of repeated social interaction can lead to social intimacy, and social intimacy leads to responsibility and civic engagement.”

Williams’ projects range from creating a spot for a neighborhood coffee shop where a gas station once stood to bringing life to once-barren industrial sites. He has made his mark on such a wide swath of the Milwaukee area and beyond that a story about him in Milwaukee’s BizTimes declared in a headline that “Blair Is Everywhere.”

A role with an NBA franchise

Williams’ most visible project is coming to life right now in the heart of the city in which he was born. Williams serves as director of real estate for the Milwaukee Bucks of the National Basketball Association. This is the team’s first season in the new Fiserv Forum, and Williams is working with the Bucks in a consulting role to create a master plan and develop up to four blocks around the arena. First up is an entertainment district that will help to bring life to an area of downtown in which people hadn’t traditionally gathered in the festival-friendly city.

“Blair is an expert on Milwaukee’s rapidly changing real estate landscape,” says Milwaukee Bucks President Peter Feigin. “As we navigated our master plan and began execution of our 30-acre district, Blair’s impressive breadth of knowledge combined with his astute business acumen have resulted in invaluable contributions.”

The site will transform the area in phases, with retail, entertainment, residential, business, and commercial properties that will be part of the largest development project ever undertaken in downtown Milwaukee.

“I believe we are dealing with some of the most compelling real estate opportunities and challenges in the entire city of Milwaukee,” says Williams, who compares himself to a quarterback putting the team’s plan into action. “That’s one of the reasons I love consulting. I like the dynamism of being presented a problem that wasn’t my own selection and then attacking that problem from as many areas as I can.”

Blair is an expert on Milwaukee’s rapidly changing real estate landscape. [His] impressive breadth of knowledge combined with his astute business acumen have resulted in invaluable contributions.

It’s just one project Williams is juggling at the moment. In La Crosse, Wisconsin, Williams’ firm is developing a 65-acre former Mobil Oil site into a multiuse area with recreational, housing, and commercial potential called Riverside North in partnership with the La Crosse Redevelopment Authority. Just south of downtown Milwaukee, WiRED is in the early stages of a $100 million development in partnership with Michels Corporation to transform a once-contaminated industrial site into an area that will include office space, a hotel, residential and entertainment spaces, as well as a riverwalk.

Multitasking is second nature to Williams, who perfected it when he was in college. He earned his bachelor’s degree in history and thought about medical school, but didn’t want to commit that many years of his life to becoming a doctor. So the “easier” route for him was three other degrees—all at the same time.

A combination of a love of the Monopoly game as a kid and a love of history turned into a fascination for real estate for Williams.

“I became intrigued by this notion that every single person every single day and every single minute occupies real estate,” he says. “It’s a universal constant. There’s nowhere you can go where somebody doesn’t have the property rights to the place where you are standing.”

Without a background in business, he wasn’t sure whether to pursue an MBA or the more technically focused M.S. in real estate that WSB offered at the time, so he did both. And because there were legalities to learn about it all, too, he also pursued a law degree.

“I just grinded,” he says of a time that included an entire semester spent sleeping on a friend’s couch because his wife, Stacy Williams (M.S. ’97), had already taken a job in Texas. “I managed to get all three of those degrees in three and a half years, which was rather staggering.”

Blair Williams’ first project with his company, WiRED Properties, transformed an abandoned gas station two blocks from where he grew up into a mixed-use development that includes a coffee shop and apartments. 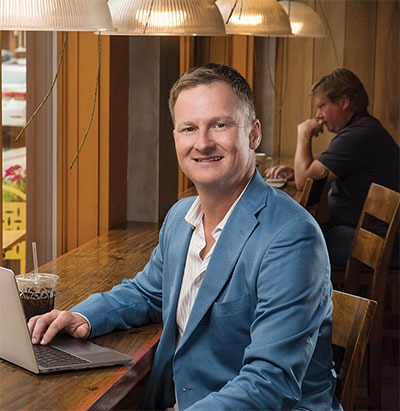 He followed his wife to Texas and got a job with Grubb & Ellis in commercial real estate, and was the company’s national investment rookie of the year in 1998. While that got him going in his career, something that happened a year later and 800 miles away impacted him in an entirely different way.

In April 1999, two students at Columbine High School in Colorado gunned down 13 people in what was then the deadliest school shooting in the United States. Williams had no connection to the school or any of the victims, but was profoundly shaken by what had occurred. He was even moved to write an essay that was broadcast on local public radio.

“I was so mortified, it was just senseless,” he says. “I couldn’t help but think somehow this was our fault, that somewhere along the way people have become so disconnected from the types of daily engagement that lead to a sense of responsibility.”

Shortly after, he read the book Bowling Alone: The Collapse and Revival of American Community, which explored the disintegration of social structures ranging from the PTA, the Lions Club, and even bowling leagues. As he and his wife returned home to Milwaukee, Williams began to lay the foundation for how he could help create ways for people to engage with the world around them.

Williams founded WiRED (a name that tips a hat to his alma mater) in 2005 and won a contract for what was going to be a condo deal only two blocks from where he grew up in Shorewood, just past the Milwaukee city limits. The condo market stalled and so did the deal, but across the street sat an abandoned gas station he knew well.

“I lived in that neighborhood from 1973 until I went off to college in 1988,” he says. “We’d come from around the corner in the station wagon and get in line for gas.”

Transforming his own neighborhood

Williams and WiRED created one of the Milwaukee area’s first neighborhood-scale, mixed-use developments on the gas station site, anchored by a coffee shop, wine bar, restaurant, and retail below its 24 apartments. He then developed the stalled project across the street into another mixed-use property, one that was precisely two blocks away from where he grew up. When it came time to give the development’s residential portion an address, he gave it the same number as his childhood home—4523.

“Now it looks like it’s always been there,” he says of the project that transformed his old neighborhood. “I like this idea that when we’re done, people feel it’s part of the neighborhood. It just feels right.”

As technology grows I want to continue to work on projects that drive engagement because that’s going to be a continual puzzle to solve. If I can find ways to use real estate to forge connections and break down barriers, that would mean we were being successful at a higher level than I’d ever hoped.

Williams has no set plan for how his work could enhance a community, he just wants to help build a stronger one.

“My approach is that I would rather go in and amplify the community that is already there,” he says. “Who lives here? Why do they live here? What are their lives like? What do they have in common? Can we create a meeting place where like-minded people in this community can gather? We want to exercise and build on the vision of the community.”

Williams’ dream developments don’t include skyscrapers and shopping malls, they include libraries and coffee shops. He wants to create the kinds of places where people can talk to each other in person, and maybe learn more about each other and their community.

“As technology grows I want to continue to work on projects that drive engagement because that’s going to be a continual puzzle to solve,” he says. “If I can find ways to use real estate to forge connections and break down barriers, that would mean we were being successful at a higher level than I’d ever hoped.”