Pugliese’s business career began at Ann, Inc., right after graduating from New York University Stern School of Business with a B.A. in marketing. After working at Ann, Inc. from 1992-2003, she decided that she wanted a change and moved with her family to Italy, where she opened a children’s bookstore called Piccoli Sorrisi. Pugliese enjoyed the autonomy that came with having her own business as well as the puzzle-like challenges that it offered. Although she enjoyed the small business owner lifestyle, in 2005, Pugliese accepted a job at Lands’ End, Inc., so she and her family moved back to the United States. Finally, in 2008 Pugliese made the decision to leave Lands’ End, Inc., and start her career with Duluth Trading, Co., where she has remained ever since.

Pugliese’s experiences are all quite different from each other, but the one thing that they all have in common is that they helped her achieve her goals. Goals are something that most people have, and whether it is a personal or professional goal, the one question that everyone has is: how do I achieve it? Business professionals are no exception to this question, so when Pugliese, an obviously successful business women, spoke to a room full of current and past MBA students and faculty, the burning question was: how can I become as successful in my career, as Pugliese has been in hers?

According to Pugliese, the answer to that question is that there is no answer. Throughout her speech, Pugliese strongly emphasized that everyone’s path to success is different, and that there is no right path to take. There is no way that she could have stood on stage and told us that by earning a B.A. in marketing, working in a big city for 11 years, moving to another country, and then moving to a small town in the U.S. would guarantee anyone else in that room a job as a CEO of a company one day. It just so happened that in Pugliese’s case, that’s that path she took, and that’s where it led her. 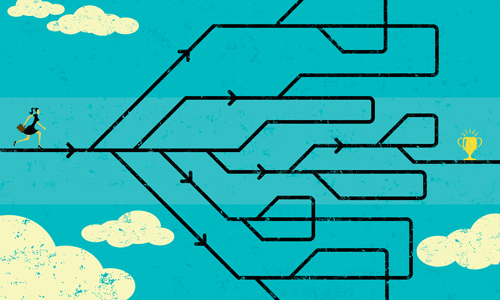 During her speech, Pugliese showed the image pictured above, and told us that this is what we should expect our career path to look like. To a room full of current MBA students and future business leaders, this image was both frightening and comforting for the same reason, which was that the possibilities are endless. It is frightening having so much ambiguity and so few guidelines moving forward with our business careers because we all want to know how to reach the top, yet it is oddly comforting knowing that we have the freedom to do whatever it is that we think is best for ourselves and our futures.

Although everyone’s path will be different, Pugliese emphasized three key points that she believed helped her achieve her goals and that will help all of us achieve ours.

Understanding that there is no clear, linear career path to success is the main point that Pugliese made during her speech. Everyone will experience ups and downs while on their career path and that’s okay. As long as we take chances, surround ourselves with people who make us want to be better, and stay on point, the career path we choose to take will be the right path for us.

Why Do I Regularly Give Back to UW-Madison’s SHR Program?