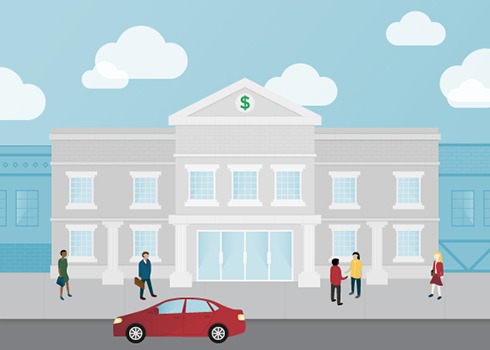 If you’re a consumer, competition is usually a positive. Greater competition can mean more choices for you as a shopper—and possibly cheaper prices as multiple companies jockey for your business.
But in the commercial banking sector, the situation is more complex. Over time, two widely debated views—competition fragility and competition stability—have emerged to describe the relationship between competition and bank stability, says Dean Corbae, a professor of finance at the Wisconsin School of Business. The competition fragility view maintains that while competition is good, it can create instability by lowering profits and leading banks to make riskier investments due to moral hazard induced by deposit insurance—often a precursor to financial crisis. On the flip side, advocates of the competition stability view say that competition can actually boost efficiency and stability, and suggest regulators should focus on identifying and removing barriers to entry.

In a working paper presented at the August 2018 Jackson Hole Economic Policy Symposium—a gathering of central bankers, academics, and leading financial market players from around the world—Corbae and co-author Ross Levine of the University of California, Berkeley, examined issues of competition and stability in the banking industry. Specifically, their study questioned: Does greater competition reduce bank stability? In cases of competition fragility, can regulatory policy continue to encourage competition while mitigating any negative effects? And finally, does bank competitiveness affect the transmission of monetary policy to the real side of the economy?
Their analysis consisted of a quantitative model that simulated the U.S. banking industry plus regression analyses using U.S. data. The model allowed for imperfect competition between banks, which affects their lending and interest rate margins. Their study contributes to a previous line of research examining competition and stability by determining the degree of competition consistent with underlying fundamentals and policy in the economy.
Here are three main findings from their analysis:

The framework can easily be calibrated to other economies besides the U.S. banking industry. At the invitation of the Inter-American Development Bank, which is hosting a November 2018 conference in Brazil, Corbae and Levine will present their findings in an effort to help stabilize Latin American banking problems.
“Competition, Stability, and Efficiency in Financial Markets” is a working paper by Dean Corbae, University of Wisconsin–Madison and the National Bureau of Economic Research, and Ross Levine, University of California, Berkeley, and the National Bureau of Economic Research.
Dean Corbae is the William Sellery Trukenbrod Chair in Finance and a professor in the Department of Finance, Investment, and Banking at the Wisconsin School of Business.