Many scholars dream of publishing forward-thinking research that is globally recognized for its positive, enduring impact, research that transforms people’s perceptions of a given topic or field.

This fall, Thomas O’Guinn, professor of marketing at the Wisconsin School of Business, took the stage at the Association of Consumer Research’s annual conference in Baltimore to receive the prestigious Long-Term Contribution Award in recognition of his 2001 research that has forever changed the way scholars and professionals understand brand loyalty.

O’Guinn and co-author Albert Muñiz, professor of marketing at DePaul University in Chicago, coined the phrase “brand community” in their study of the same name published in the ACR’s Journal of Consumer Research.

“It was really the first paper to explicitly acknowledge the social nature of consumer brands,” O’Guinn says. “Prior to that, the academic field and industry largely thought of brands as just the brand and a single consumer, what I call the ‘lonely and fictional dyad.’ There was nothing at all social about it. Our work got people thinking much more about the consumer-to-consumer dimension of brand-consumer relationships.”

“The relevancy of Professor O’Guinn’s paper has grown exponentially since it was published in 2001,” says François Ortalo-Magné, Albert O. Nicholas Dean of the Wisconsin School of Business at the University of Wisconsin-Madison. “His thought-leading research has had an enduring impact on the way brands do business, and we are proud to have inspiring and influential researchers like Tom in our community of scholars, leaders and learners.”

A prestigious award unlike any other

Of the hundreds of articles published in the Journal of Consumer Research over the past 40 years, only five–including O’Guinn’s–have received the revered Long-Term Contribution Award.

“The purpose of the award is to recognize an article published in the Journal of Consumer Research at least 10 years ago that has had the most significant impact on the field of consumer behavior,” says ACR Director Rajiv Vaidyanathan, also a professor of marketing and MBA director of the Labovitz School of Business and Economics at the University of Minnesota Duluth.

Among the rigorous criteria, Vaidyanathan notes, is that the articles under consideration had to have at least 1,000 Google citations.

By comparison, O’Guinn’s brand community article has nearly 3,000 Google Scholar citations–and counting. It also has been cited as one of the 20 most-cited articles in the fields of economics and business worldwide.

Today, the term “brand community” has become part of the marketing lexicon, and a driving force in the marketing communications strategies of global corporations.

Perhaps O’Guinn’s research is considered visionary because it identified brand communities as the wave of the future several years before these communities “went mainstream” on Facebook, YouTube, and other social media platforms. 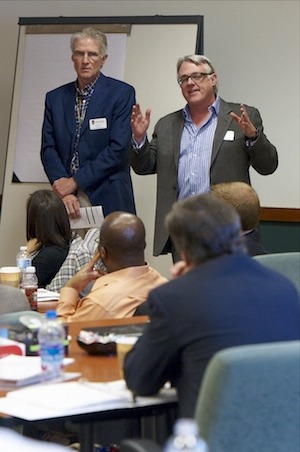 “The fact that our brand community work came along at the dawn of the Internet age made it much easier to change thinking,” he says.

Specifically, these non-geographically bound communities have formed among brand devotees, and operate in a manner similar to traditional, face-to-face communities. Like all communities, brand communities are drawn together by three key traits: a shared consciousness, a set of rituals and traditions, and a sense of moral responsibility.

“When Apple rolled out the Mac in 1984 with the reference to Orwell and all of that, they used the tagline ‘The Computer for the Rest of Us,’” O’Guinn says. “The whole idea was that people in the Apple community were so incredibly different than everyone else.”

According to O’Guinn, Apple’s market share was relatively small at the time, yet it had an intensely loyal global community of followers and user groups. These people passionately coalesced around the Apple ethos, its aesthetic and uncommon computing products. From that core brand community of ardent supporters, Apple emerged as one of the world’s leading brands, if not the leading brand, as many would argue.

Understandably, companies and marketing firms have wholeheartedly embraced O’Guinn’s concept of brand communities, and have integrated it into their strategies to connect with consumers on a deeply personal, meaningful level.

Simply put, it has been a game changer for brands around the world–everything from cars, to apparel, to packaged goods–even toys.

“Lego has created its whole remarketing effort on building a community around  user groups and getting people to have contests or build displays,” he says.

What does the future hold for O’Guinn’s research on brand communities?

Beyond the world of commerce, he has seen evidence of political entities tapping into the concept as a strategy for gaining influence.

“People in politics are going to use the idea of a strong community to build support, both on the left and on the right,” he says.

O’Guinn is currently collaborating with Meredith Thomas, a Ph.D. candidate in marketing at the Wisconsin School of Business, on expanding the idea of brand communities in a piece that has the working title “BrandsWorld(s).”

He even will appear as a commentator in an upcoming cable television series about iconic, brand-savvy American business leaders, which will be broadcast on Discovery’s American Heroes Channel.

Looking back at his pioneering work, and the recent Long-Term Contribution Award, O’Guinn says the whole journey has been personally satisfying on many levels.

“Everybody likes to make a difference,” he says with a chuckle. “So, to me it’s a validation of a good idea. And that makes me feel good.”