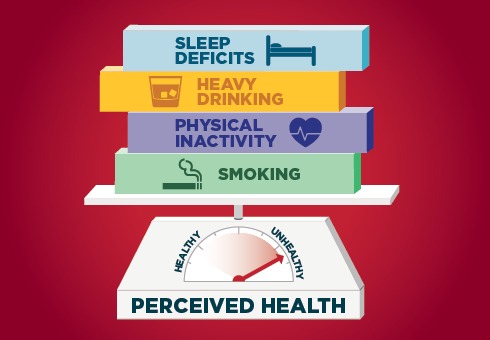 Fact: Our bodies are machines. Whether we choose to embrace that reality or ignore it, we make choices every day that impact how we feel physically as well as how we feel about ourselves—the way we would evaluate or assess our own state of health.
In a study with my co-author, Kyeonghee Kim, a Ph.D. student in the Wisconsin School of Business at the University of Wisconsin–Madison, we looked at what we define as “unhealthy behaviors,” lifestyle choices that can have significant, long-term impact on our health, and how individuals might rate their own physical health status. These unhealthy behaviors encompassed not only what people might consume—whether that is a steady diet of cigarettes and double bourbons—but also extended to what they are not getting or doing enough of, such as quality sleep and consistent exercise.


We know that prior studies have established a link between an individual’s self-reported health status and the existence of one unhealthy behavior; that assessment is not new. Other studies have isolated specific behaviors, such as smoking or lack of physical activity, and examined them in the context of health self-assessment.
Our paper is a departure from previous work because we examined the additive nature of unhealthy behaviors and looked at these relationships over a two-year period. We have bundled all of the factors together, taking the perspective that we as humans are an aggregate of our habits and behaviors, both good and bad, and that this aggregate can serve as a road map that shows what our health status is over a period of time. For example, someone who never exercises, cuts corners on sleep, and smokes and drinks excessively to decompress might self-report differently than an individual who claims to have the polar opposite lifestyle. The question we wanted to explore, therefore, was whether there is a relationship between multiple unhealthy behaviors and an individual’s self-reported health status.
The study parameters
For this study, we divided unhealthy behavior into four distinct categories using indicators that are consistently cited by physicians as major health contributors: physical inactivity, smoking, heavy drinking, and sleep deficits.
We used data from two publicly available sources: the National Health Interview Survey (NHIS), that contains data representative of the civilian, noninstitutionalized populations, and linked it to the Medical Expenditure Panel Survey (MEPS) that includes data for an additional two years. We utilized information for unhealthy behaviors from the NHIS survey between 2006 and 2010 and compared it to a person’s perceived health status at the end of the next calendar year from the MEPS data. Our study included 12,160 individuals between the ages 31 and 60 who represented 123.8 million U.S. adults.
Increase in unhealthy behaviors, lower perceived health
Our findings suggest that unhealthy behaviors and how individuals perceived their overall health status were related. We controlled for other variables that might influence an individual’s response, such as age, sex, race, income, education, and health-related items, like comorbidities and inpatient expenditures. Our model showed that if we had no health-related items, individuals with unhealthy behaviors are more likely to rate their health more favorably than if they had health-related items. Also, as the number of unhealthy behaviors grows, the chance that a person indicates a poorer rated health status also increases. A poorer rated health status was more apparent for those with health-related items when the number of unhealthy behaviors increased.
Our results have implications for the larger health field. At the individual level, health is wealth, as the old saying goes, but it is also big business: the health care industry employs millions of workers and makes up roughly 20 percent of the U.S. gross domestic product. These findings are useful for insurers and others who implement case management programs. In addition, there are important implications and future avenues of research in relation to individuals and health care expenditures. As DeSalvo (2009) noted, a perception of poor health status can go hand in hand with future medical spending. Building on the results of this paper, we plan to explore the potential relationship between unhealthy behaviors and expenditures.
Read the paper “The Role of Unhealthy Behaviors on an Individual’s Self-Reported Perceived Health Status” published by North American Actuarial Journal.
Margie Rosenberg is a professor in the Department of Risk and Insurance and the Assurant Health Professor in Actuarial Science at the Wisconsin School of Business.