Christopher Marr didn’t hold anything back. In front of a packed room at the UW Real Estate Club meeting at the Pyle Center on the University of Wisconsin-Madison’s campus, the CEO of CubeSmart mixed in humor, self-deprecation and honesty in speaking about the self-storage industry, transformation transactions and pivotal moments in the company’s history.

The self-storage industry is likely one with which much of the audience was unfamiliar. In fact, less than half of the students said they had even used self-storage in the past. So Marr started with an update on what self-storage is perceived to be and what it has become, noting that now the architecture of buildings is more pleasing, more vertical, involves climate-controlled spaces and windows, all of which leads to a more friendly and accessible environment. However, there are still challenges. 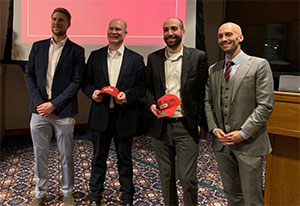 Marr stressed that any movement by people is good for his industry. Increasing rent rates, earlier use by college students, small routine capital expenditures and month-to-month leases that allow consistent repricing all allow self-storage to do well in good and bad economic times.

“We are still not the most desired product in that we are paying real estate taxes but so is everyone else, but not creating a lot of jobs. What we sell on the offset of that is low-impact use, not a lot of traffic Monday through Friday, it’s a good complement to something that may be closed on a Saturday where we have most of our in-and-out traffic so we try to sell that.”

In June 2006, Marr was part of a new management team at CubeSmart trying to reorient their portfolio, focusing on quality properties in the top markets. They sold low-growth markets and reinvested in higher-growth cities in a process that Marr described as “painful.”

In doing so, they purchased four stores in the New York area from Storage Deluxe, setting the stage for one of the key milestones in CubeSmart’s history. By proving they could close efficiently, paid a fair price and were “generally nice guys,” CubeSmart eventually set up talks that resulted in the full acquisition of Storage Deluxe’s portfolio.

To finish Marr gave the students in the audience some words of advice as they start their future real estate careers. Overall, he noted that success, both in your personal and professional life, comes down to three main concepts.

“No. 1 is optimism. Optimistic people do much better work. People want to be around optimistic people. You want to try to remain optimistic in everything you do,” Marr said. “Secondly, I think you want to take prudent risk. Those folks who don’t take any risk typically find less satisfaction in what they do. Lastly, it’s resiliency. Throughout your career you’re going to be told that you can’t, you’re not going to get the promotion, you’re going to be left out. People who are able to not take that personally are able to say ‘Ok, learn from it.’”