Jim Letchinger never had any traditional education in real estate, nor any true experience before he decided real estate development was going to be his dream.

Nonetheless, Letchinger, now the President of JDL Development based in Chicago, had a drive and determination that took him from selling light bulbs right after graduating college to becoming one of more well-known developers in Chicago. 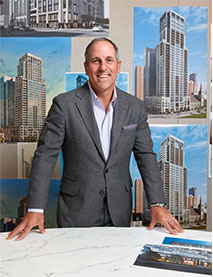 “I’m always dreaming. Sometimes they’re more like a nightmare,” Letchinger said “You have to dream if you want to do something great.”

Letchinger was presented with the E.J. Plesko Distinguished Developer Award on Nov. 15 at the Pyle Center in Madison. Past winners of the award include John Gates, Chairman and CEO or PortaeCo, and Jim Grusecki, CEO of Northern Builders.

“This award is given to world-class practitioners that embody the spirit, imagination and entrepreneurial skills that [James] Graaskamp spoke about and that EJ Plesko practiced,” said Michael Brennan, Irgens Executive Director of the Graaskamp Center for Real Estate. “This award was given to Jim for his accomplishments to date and for some of the things he is going to do. He may well be today, the number-one high-end, large-scale developer among Chicago’s multi-family condominium developers and that’s a great achievement.”

Letchinger came from a business-oriented family, where his grandfather built a company to $20 million in sales with 1,000-plus employees in the late 1960s. When Letchinger graduated college, he had no idea what he wanted to do, but chose to start his own business selling lighting to other companies.

And while the business thrived, Letchinger wasn’t achieving realizing as much personal satisfaction. So he searched for a project and found one at 210 E. Walton in Chicago. The property eventually became his first building and one of the units turned into his family’s new home.

“I was hooked. I knew I loved this business,” Letchinger said. “I spent every day there. I couldn’t spend enough time doing it and I decided it was time to get out of the lighting business.”

From there, Letchinger has never looked back, nimbly navigating through several real estate cycles and building JDL into a company that has developed more than 1,200 units with another 1,500 on the way.

He compared his job as a developer to that of an entrepreneur, saying he isn’t necessarily Steve Jobs or Bill Gates, but takes chances, does what he loves and controls his own destiny.

“If you want to be a developer, you need at least one skill. You need to know construction, architecture, or banking, being a lawyer never hurts. I didn’t have any of those skillsets,” Letchinger said. “I knew a little about design, a little about construction. I knew nothing about finance and less about law. But I had a drive. Gain a skill and the rest of it can all come together.”